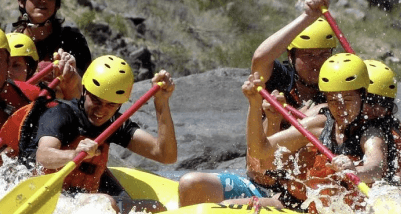 Royal Gorge Background
About 3 million years ago as the Rocky Mountains were beginning to rise from the surrounding plains, the Arkansas River, just a tiny stream at the time, began to wear away at the stone it flowed across.  Over the years, this small stream grew immensely, cutting a deep channel for itself through the granite which is now called the Royal Gorge.  Well before whitewater rafting the Royal Gorge was possible, Native Americans, fur traders, and early explorers utilized the Royal Gorge for its protection from the elements and relatively mild climate.  In the late 1800s, the Royal Gorge Railroad was built for access to nearby silver mines, as well as a passenger route along the Transcontinental Railway.  The Royal Gorge Bridge was built in 1929, and is the highest suspension bridge in the world at 955 feet about the Arkansas River below.

Expect big drops, fast-moving water, and crashing waves as you raft through the rapids, such as Sunshine Falls, Grateful Dead, and Sledgehammer of the Royal Gorge.  Don’t focus too much on the breath-taking granite cliffs and scenery as the roller-coaster rapids will need all of your attention to navigate successfully.  Rafting the 12-mile section through the Royal Gorge can easily be done on one of American Adventure Expeditions’ many ½ day rafting adventures (allow 3 hours), though, if time permits, a full day excursion is a trip not to be missed (allow 6 hours).  As the only outfitter near the Royal Gorge with a riverside outpost, AAE’s guests are able to experience Royal Gorge rafting like no one else.

While American Adventure Expeditions offers both paddle boats (everyone paddles) and oar boats (only the guide rows) for their trips, paddle boats are typically the best option for rafting the Royal Gorge.  Paddle boats allow the guests to be a part of the action and provide the boat’s power, while the guide (every AAE raft comes with a guide!) steers around and through the rapids and other obstacles.  For those not interested in paddling, riding an oar boat through Bighorn Sheep Canyon is a perfect way to combine Colorado’s beautiful scenery while getting a taste of Colorado whitewater.

The Royal Gorge was slowly formed eons ago by the Arkansas River, and whitewater rafting the Royal Gorge is the best way to experience this Colorado landmark.  Consistently considered one of the Top 10 whitewater runs in the country, this is a must-do for all whitewater enthusiasts!